"The Best Thing I Ever Did!" 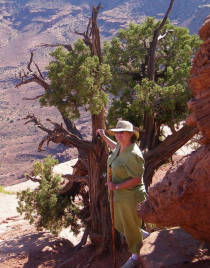 Wannell Roberts had always been a very active "go-getter" with an outgoing personality and a love for the outdoors.  But due to debilitating knee pain, she became unable to do the simple things in life such as walking steps and arising from a chair without extreme difficulty.  She was unable to ride her bike that she enjoyed so much, and running was out of the question.  Walking for enjoyment had become a thing of the past.  She rated her pain as a 10 on a scale of 1 - 10.

After exhausting all conservative treatment on her knee, she made the trip down from College Station to Houston to have a minimally-invasive Quad-Sparing total knee replacement by Dr. Nixon.  She says "it was the best thing I ever did!  Dr. Nixon was the best!!  Giving details and being there the whole time."  After surgery, Wannell excelled in physical therapy and was using a cane by two weeks.  She progressed so well, her physical therapist in College Station remarked how much better she did than most of the patients he sees following total knee replacement.

Three months after surgery,Wannell went hiking in the national park in Utah.  She now says "I can do anything that I want to do".  She is back hiking, walking, and riding her bicycle and has no pain in her knee.  When asked how her mental outlook has changed since knee surgery, she says "I don't feel that I'm defeated anymore".

Her advice to someone with knee pain that needs knee replacement is "be aware that you have a choice of traditional or less invasive.  Make an informed decision".  Wannell is convinced that there is a difference and she is great testimony that one can return to an active lifestyle after successful joint replacement surgery.

You don't have to be defeated by disabling knee pain.